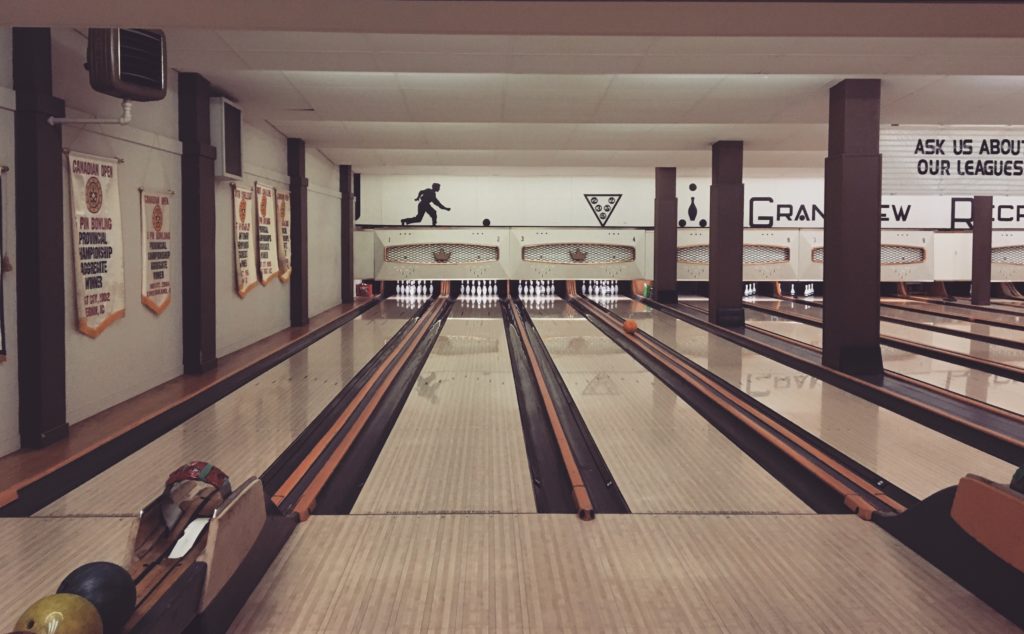 Even as I was going into it, I had a feeling our third date was going to be our last. Our interactions became more markedly awkward as time passed. I responded to his boisterous extroversion in near whispers. “The whole bar doesn’t need to hear our conversation,” I said quietly, as he banged on the table to keep time with his story. It’s not that his bold personality silenced me; I wanted him to dial down the volume so other patrons wouldn’t look around to find the shouting man and his embarrassed companion, trying to retreat under the table. I’m comfortable with a spotlight when I command it, not when it is thrust upon me by my date’s gesticulations.

I agreed to the third date as a way of bringing our time together to a conclusion. He suggested bowling. I love The Big Lebowski  but I hate bowling. I tend to make three strikes in a row and gutterball the rest. By the time I’ve had a few beers, I’m practically tossing bowling balls down the lane. I agreed to go bowling, even though I anticipated that it would only exacerbate the awkwardness of our dynamic.

We had a few beers before we went over to the bowling alley. The night was off to a bad start. He was frustrated by the attention I had payed to the Lakers game on TV, I was annoyed by his over-apologizing. On top of that, my hair was mainly dry shampoo and I wore leggings for pants. As we got our bowling shoes, my date addressed the attendant like he was Steve Buscemi addressing his fellow kids . “A size eleven, please, brother. Thanks, duder.” I asked for my shoes and a can of beer without a single diminutive.

Between turns, I drank my beer and observed my date as he made his bowls. I had a lot of time to think about the direction in which the evening was going. I had made two strikes and three spares before my luck ran out. My date thought it best to encourage me. This was embarrassing but endearing while we had the section to ourselves. It became mortifying when couples on a double date arrived beside us to bowl and bear witness to our mounting mutual discomfort. We started our second round. After my first ball landed with a loud thud and rolled into the gutter, I squared up with my second ball and tried to get into the motion of rolling rather than tossing. Then, to the whole bowling alley, he exclaimed, “GO COURTNEY! YOU CAN DO IT!” I was aghast. Rolling motions be damn, I tossed the ball under what felt like the watch of everyone in the alley. The ball went immediately off course and rolled with a clatter into the gutter. I returned to our seats. “I appreciate your enthusiasm,” I said delicately to my date, “but not everyone here need to know how I’m bowling.” He looked crushed. “I was trying to be supportive.” “And I appreciate that, but I would appreciate even more if you supported me a little more quietly.”

When I declined his invitation to come over at the end of the night, he offered to walk me to the bus stop. We stood at the corner of Commercial and Broadway, our eyes on the street. I knew I had to end it then and there. I readied myself to tell him I wouldn’t see him again. Suddenly, a convoy of police cars came down Broadway with sirens screaming and stopped in the middle of the intersection. An officer in black ran out of the car and into the SkyTrain station behind us. Another officer followed him. A crowd of people at the bus stop stood at attention and watched as the police cars moved up the street. The first officer approached my companion and me, and asked if we had seen anyone running. I explained that the only running people I had seen were police officers. The officer looked distractedly to the road: “Someone was stabbed across the street from here, and we think the perpetrator went running into the train station.” Those gathered near us agreed that they hadn’t noticed anything unusual. The two officers took off in the opposite direction, leaving everyone to react to the news of the stabbing. “Oh my God,” said the young man in front of me to his female companion. “We have to get out of here. What if he goes on a shanking spree?” I was shocked. I was at a loss for words. It seemed tactless to break it off with my date while someone lay bleeding in a gutter and a madman was primed for a shanking spree. Then I saw my bus arrive. “That’s my bus,” I said. “Gotta go!” I called, as I literally ran away from my date. I would have had to wait ten to fifteen minutes for another bus. Anyway, I thought, I can always end it over text message.

Song of the Day: Like Soda by Violent Soho

One thought on “The Third Date”

My Terrible 24 Hour Trip to Honolulu

The Rave in Sydney, Australia