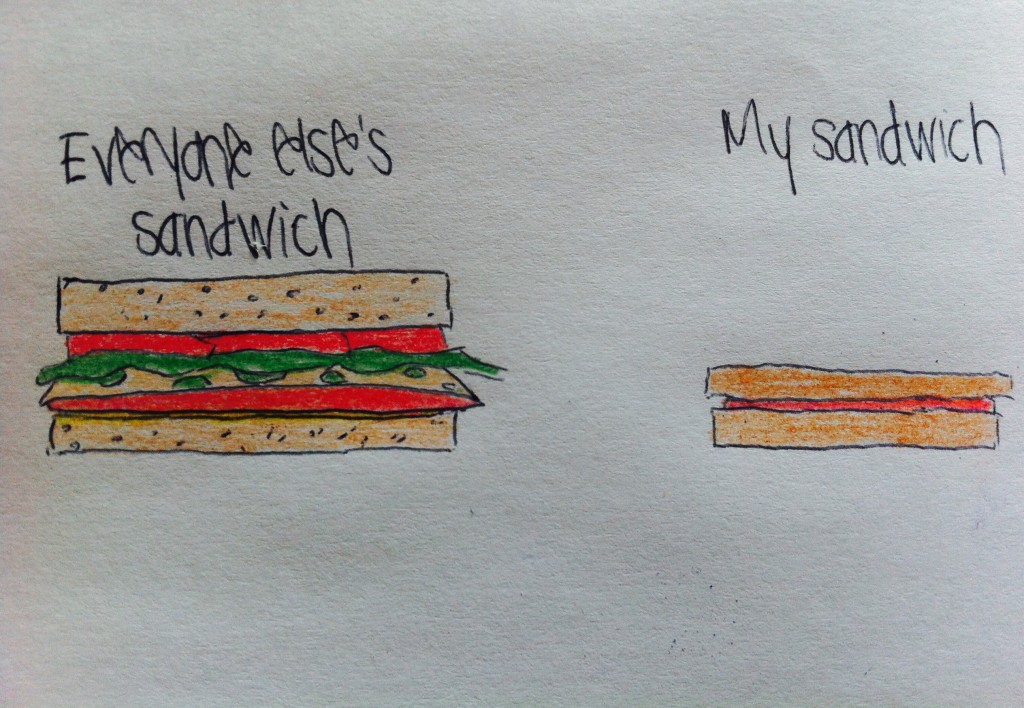 Throughout elementary and high school, I ate inexplicably bad lunches. This is owing as much to the utter lack of discerning taste I had as a child – I was as excited about Alphaghetti as I was Christmas dinner – as it is my parents’ willingness to feed me whatever my bad taste desired. They didn’t let me go buck wild eating Fruit by the Foot or Dunkaroos by any means. I always had fruit and vegetables in my lunch, plus a granola bar so I wouldn’t try to trade my baby carrots for someone’s Ritz Bits. What was inexplicably bad about my childhood lunches was that I ate a sandwich nearly every day that consisted of nothing but bread and lunchmeat until such a time that my mother decided that there were too many nitrates in lunchmeat and I ate sandwiches that consisted mainly of bread. It’s not that I disliked vegetables or condiments. I simply thought that vegetables would induce sogginess in my bread and condiments were superfluous in school lunches. On weekends I liked to make sandwiches with as many ingredients as the bread could hold. On school days, I wanted my sandwiches to have as little flavour as possible, perhaps to reinforce my belief that elementary school was terrible. According to the standards set by Canada’s Food Guide in the Nineties, I ate a balanced diet. Now that Canada’s Food Guide has been adjusted, that I often ate plain kaiser rolls for lunch seems horrifying. 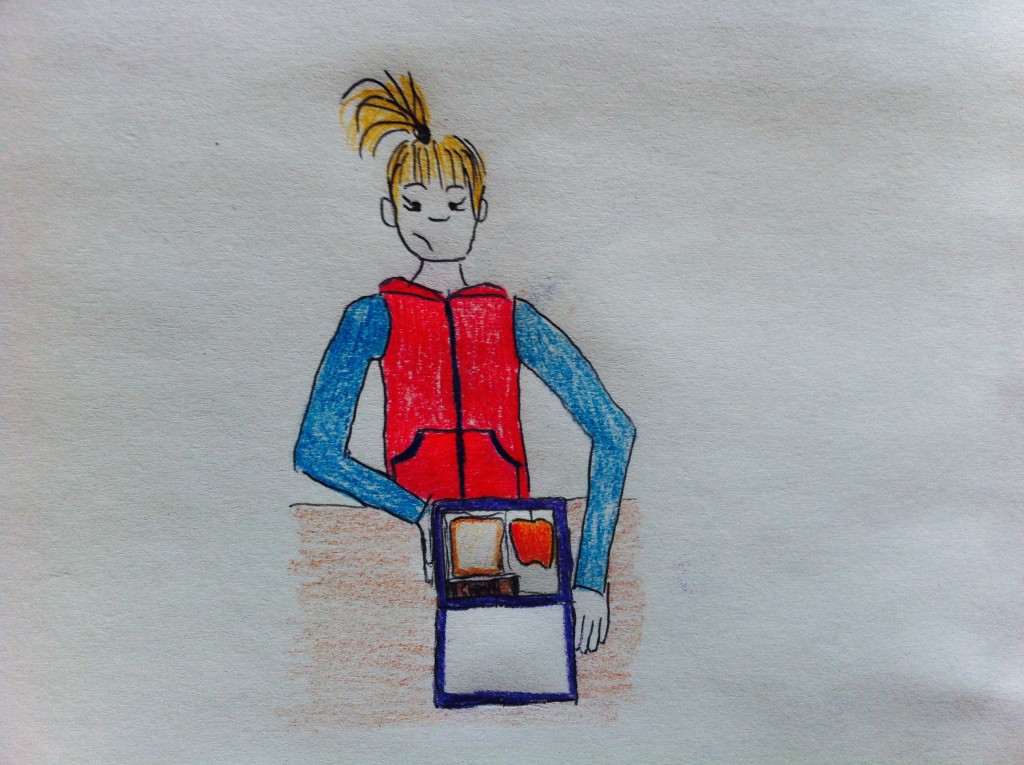 Every so often, in an attempt to introduce some variety into my lunches, my mother would buy tortillas. This was long before burritos hits the mainstream, in the days when the only tacos I knew about were the Ol Del Paso hard shell kind that inevitability tasted like cardboard and spilt your toppings. The tortillas my mother brought functioned as an alternative vehicle for my lunchmeat sandwiches. However, towards the end of grade five, I was eating white flour tortillas with mozzarella cheese and mayonnaise as I began to tire of the same plain ham sandwiches. By the end of the school year, my dissatisfaction with my lunches was such that I didn’t want to eat my sandwiches at all. 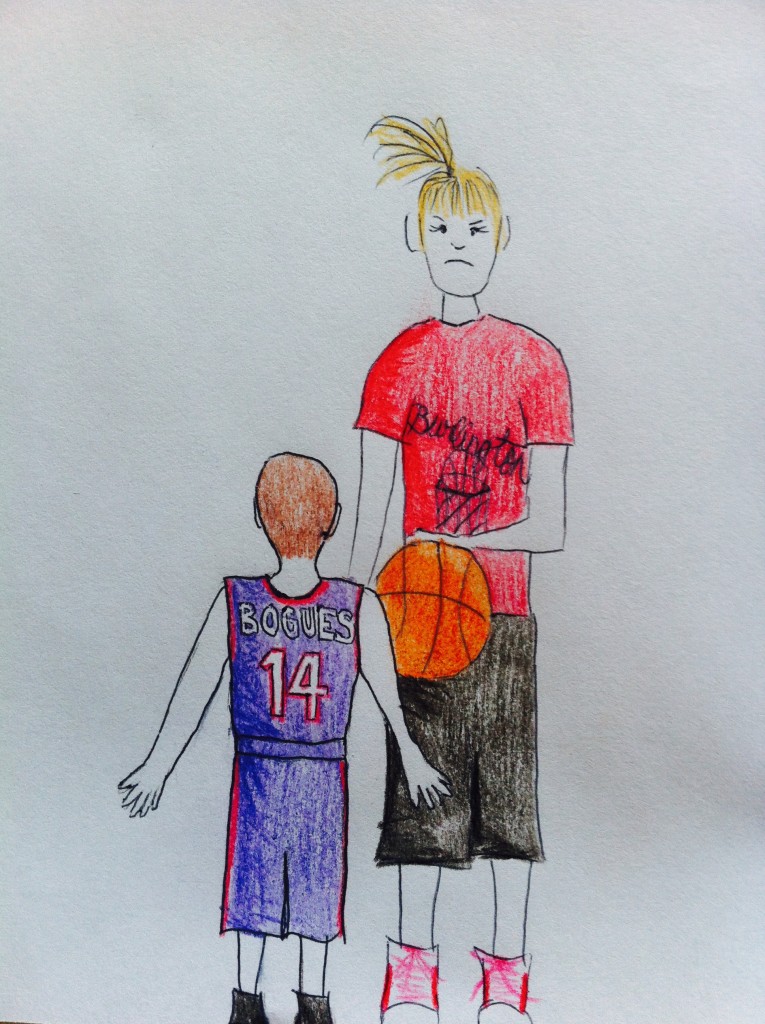 From ages nine to eleven, I attended an end of August, co-ed basketball camp at M.M. Robinson High School. Each year, my mother registered me with a few family friends while I dreaded the camp all summer. What I dreaded wasn’t playing basketball so much as it was interacting with the other players.  I was too shy to approach the girls I played with and I was disliked by the boys because I had the height advantage of Shaquille O’Neal over Muggsy Bogues and I still couldn’t make a field goal. When I was a weekend away from the start of another basketball camp, I went to retrieve my Roots backpack from the spare room I had left it in at the end of June. Even before I opened the bag, I could tell that something smelt off. I looked carefully, then frantically, through the pockets of my backpack trying to determine the source of the smell. I held my breath as I opened the last pocket. Inside were two mouldy wraps. I hadn’t eaten my white flour tortillas with mozzarella cheese and mayonnaise on the last day of school and they had turned into a science experiment over the course of the summer. I disposed of the evidence of the uneaten, long since decayed lunch and returned to my backpack. It still smelt like rotten mayonnaise. I tried to clean it with everything that seemed logical and a few things that didn’t but I couldn’t rid the backpack of the smell. I can’t tell my parents about my backpack, I thought, because then they’ll know I didn’t eat my lunch. I doused my bag in citrus body spray and hoped the smell would go away in a few days. It didn’t, of course, so I kept my backpack underneath the bleachers for the entirety of basketball camp in the hope that the smell would go unnoticed or at least that it wouldn’t be traced back to my bag. 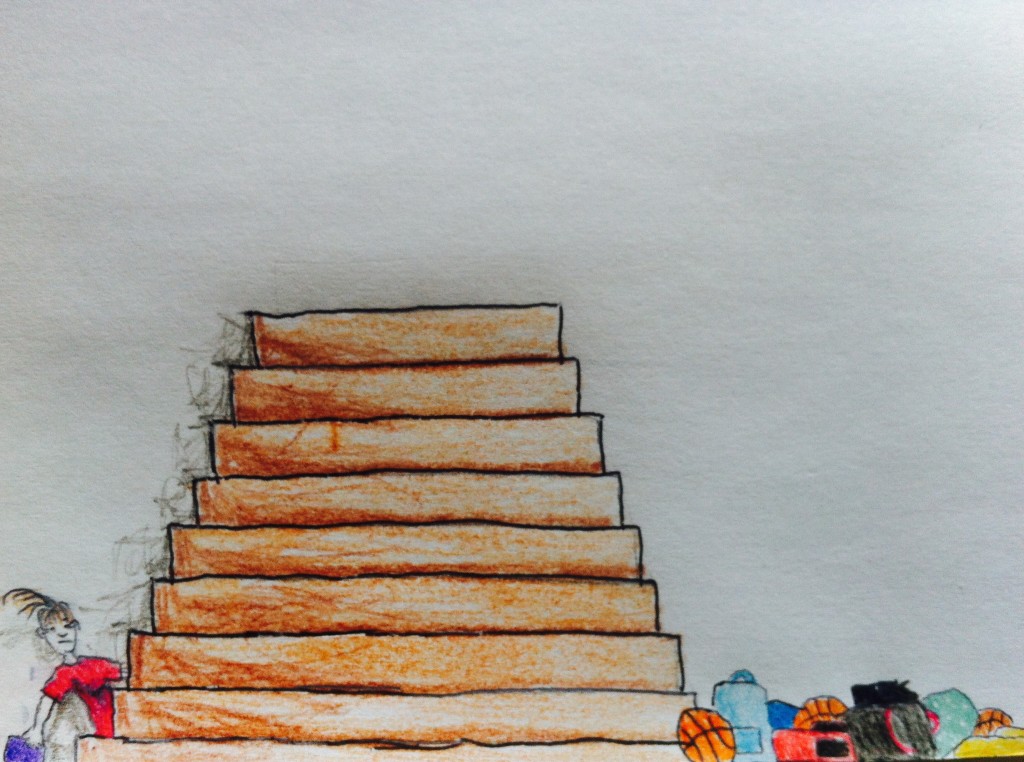 Whether anyone noticed the smell of my backpack, I can’t recall, which likely means that no one noticed. What I can recall is feeling like the most awkward person at basketball camp, a feeling that was exacerbated every time someone caught me scurrying out from the corner of the bleachers with my lunch bag and ham sandwich. (This was not at all conducive to all-star performances in games of Bump.) The smell and the apprehension lingered on into the first week of school and for many weeks after that. Eventually fall turned to winter and all that remained of the mouldy tortillas was a faint sour smell and the oily scent of citrus body spray.

In time, I moved out of my awkward phase and the boys around me hit their growth spurts. The one thing that remained the same was, I never could finish another mozzarella and mayonnaise wrap.

Song of the Day: Hiding to Nothing by Bad Dreems