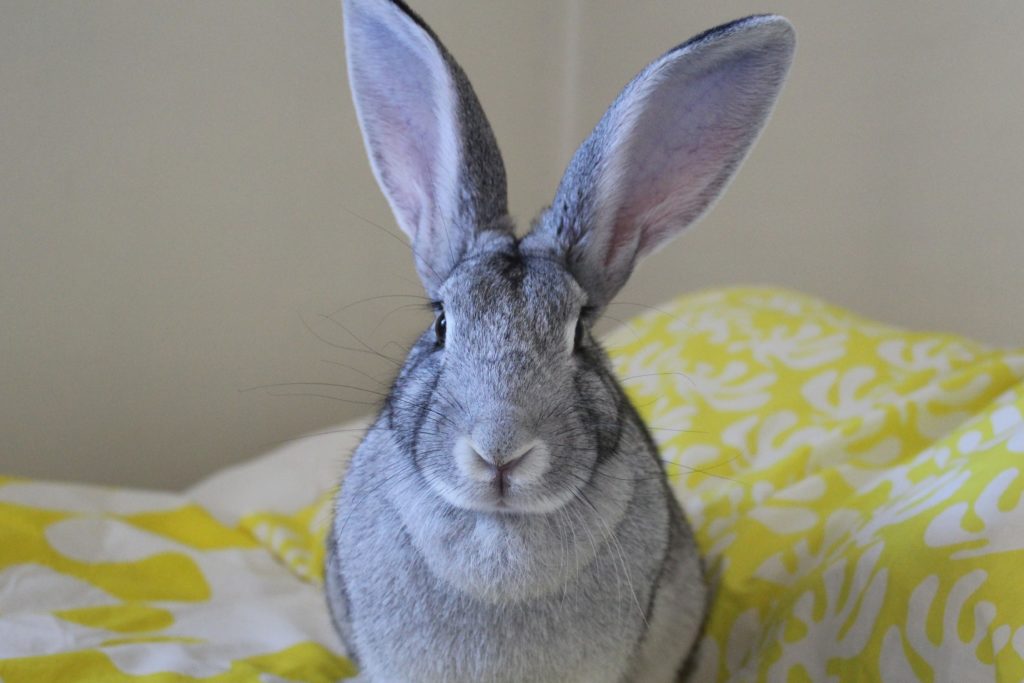 I have never been a great babysitter. This is owing to my general inexperience caring for young children and my preferred topics of conversation: NBA trades and Kendrick Lamar’s discography. A great babysitter I am not but a great pet sitter I am. When my friend and coworker Beth told me she was in need of someone to look after her rabbit Mochiko, I enthusiastically volunteered. After all, how hard can it be to look after a rabbit?

Very hard, it proved to be. To start, Mochiko is no ordinary rabbit. She is two feet long when she extends to her full length. She hardly befits the diminutive ‘bunny.’ It was only after extensive research that I concluded she was not, in fact, a full-blown hare. On top of that, Mochi is no ordinary pet. Beth and her partner Drevs found her a few weeks prior, hiding under a car with an injured paw. They tried to find her owner but had no luck. They tried to contact a humane society but no organization was willing to take a rabbit. Their attempt at a good deed turned them into owners of a rogue rabbit.

Mochiko arrived at my place in a cage that could fit a small human. Beth provided me with a litter box, a bag of hay and a list of foods that a rabbit can and cannot eat. I waved goodbye to her foster owners, tossed a few sprigs of basil into the giant cage and thought about easy rabbit sitting was going to be.

Mochi hopped around the apartment with relative ease until dinner. She followed me to the kitchen as I prepared herbs for pasta and moved around my ankles looking for handouts. Keeping her out of the fridge was not without its difficulties but I managed to appease her with some mint. The mealtime complexities increased when I realized Mochi’s interest in food was not limited to what I voluntarily shared. She desperately wanted what was in my bowl. She sniffed around my feet while I ate, and then began to reach for my chair. The problem with a two-foot long rabbit is that there are few places she cannot reach. Chair reaching led to chair jumping. Mochi was on my lap, scrambling for my bowl. I was in shorts, holding my bowl aloft and wondering when her nails had last been cut. It was only after I laid down a buffet of greens that I could finish my meal in peace. 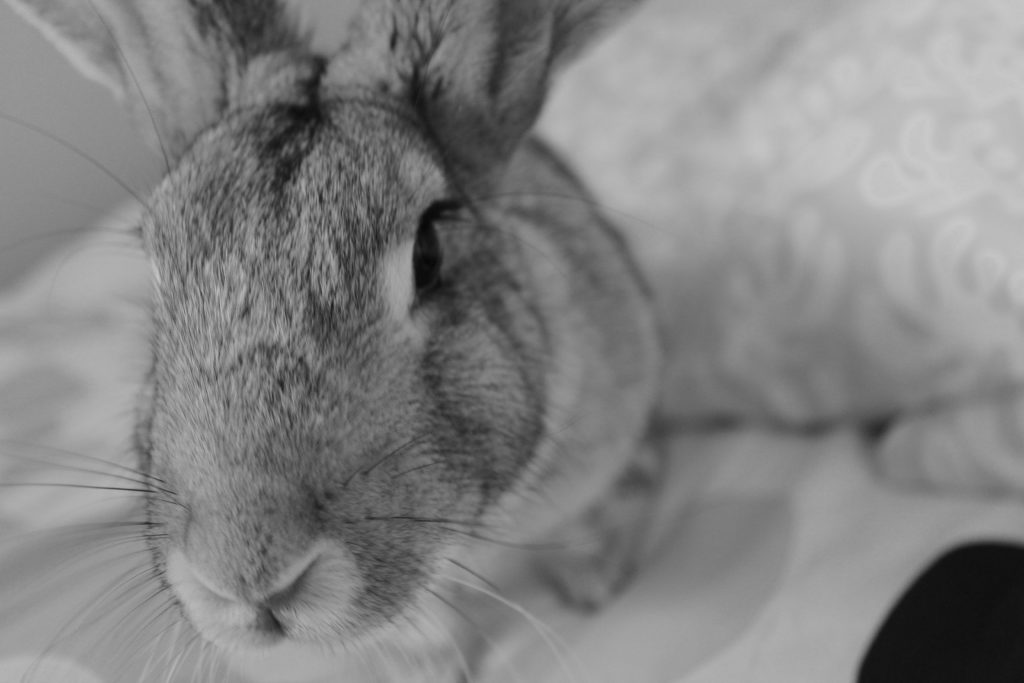 After the small chaos of dinner, Mochi and I settled down for the evening. She munched hay in her cage while I wrote. Before long, she was sniffing around my bed. I invited her up with little reservation. She has taken previous interest in a corner of my bed but I trusted that she was a litter box-trained rabbit. At eleven at night, I realized she was not adverse to the possibility of a litter box but she much preferred an immediate release. This is to say, she peed on my bed. The linens came off, the rabbit was banished to her cage. I settled into my stripped bed to the sound of rabbit munching.

I awoke at six in the morning to the sound of Mochi’s plyometrics, which only halted when I got out of bed to prepare our breakfast. I planned to get some writing done but I instead spent the morning lifting Mochi from my bed and onto the floor. Now that my linens were clean, I didn’t want to risk another urinating or defecating episode. Mochiko was not Pavlov’s rabbit. I picked her up off the bed ten times in as many minutes but she could not be conditioned to learn that jumping on the bed would be followed by the pick up she detested. Exhausted by my morning of rabbit chasing, I put her in the cage and left for work.

The days that followed proceeded in much the same way. If I ate a banana, Mochi was on my lap and in my face trying to eat it too. If I opened the fridge, she would practically hop into the produce drawer. The last straw was the cord chewing episode. In one morning, Mochi chewed through earbud cords, an iPhone charger and a laptop charger. Luckily, the laptop charger survived, but the episode resulted in a long, silent bus ride to work that afternoon.

After a full week together, Mochiko went back to her foster home. While she was an undeniably beautiful animal, I don’t miss her rabbit runs and the daily stress of wondering if she had shit on the bed. Despite my hopes, we didn’t make great companions and I didn’t make for a great rabbit sitter. Perhaps I can’t be blamed. After Mochi left, my friend Mitch articulately said, “Rabbits are thing destroyers. By thing, I mean anything.” Destructive tendencies are hard to accept in even the furriest house guests. Anyway, I tried my best. I don’t often offer conciliatory mint leaves to guests who urinate on the furniture.

Song of the Day: Rabbit Run by City Calm Down