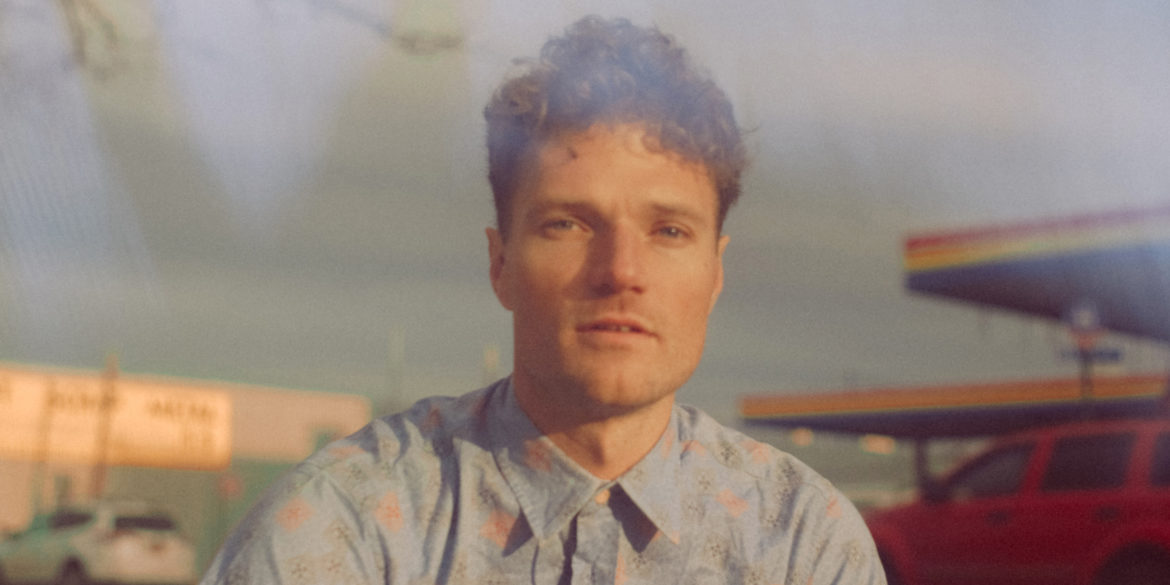 Best known for his vibrant electronic albums and confetti-filled live shows, Rich Aucoin’s fascination with death seems incongruous. However, reconciling these ideas is central to the Halifax-based musician’s creative process.

His upcoming Death Tour this fall will be a celebration of life and his dazzling new album, Release, is a colourful exploration of ideas around existence and mortality.

“I knew I wanted to make a record on death,” says Aucoin, matter-of-factly, as he sits back in his chair in a bright café in downtown Toronto. “And I wanted a lot of colour so it wasn’t this dark connotation of death and was more in line with my view of the celebration of life until it’s over.”

To talk to Aucoin is to understand how seemingly incongruous interests come to cohesion. In conversation, Aucoin is animated and engaging; he smiles and laughs a lot, using his hands when he talks. He speaks as passionately about the art he creates with friends and collaborators as he does about existential philosophy.

“The whole album is about looking at how we build our foundations for viewing existence,” says Aucoin. He talks about philosophical concepts with a warmth that makes even the most obscure ideas more accessible.

Release was inspired by Aucoin’s reading of The Denial of Death by Ernest Becker, a psychological text that harkens back to Aucoin’s studies of philosophy and contemporary studies in university. One of the themes from Aucoin’s reading that resonates through the album is the idea of being present. “And presence being fuelled by a healthy awareness of death,” he says.

It’s a fitting topic for Release, which is the last in a trilogy of albums rounded out by We’re All Dying to Live (2011) and Ephemeral (2014). Aucoin’s Death Tour marks an end to a creative trajectory that was nearly 10years in the making. Though the albums are thematically connected, Aucoin acknowledges, “I didn’t have it planned out so much. They all just seemed to focus around death in different ways. Now that I’ve fully made the record I know this is a trilogy and it’s over.”

On album opener “The Base,” Aucoin uses audio from Sam Harris’s talk, Death in the Present Moment. “I thought it was a nice way to start the mindfulness of the record I was trying to make,” he says. “It really puts in perspective how quickly the mind can be racing towards future anxieties.”

He intends to promote mindfulness through his live show by interspersing his performance with ideas from philosophers, further expanding on the ideas of each song. “I want to have the show be almost a meditation through the themes of the record,” he says.

Injecting a heady dose of colour to otherwise dark themes around death and dying, Aucoin is synchronizing his Release live shows to Disney’s Alice in Wonderland. The dreamlike imagery, as well as the concept of Wonderland, resonates with Aucoin.

“Wonderland is a metaphor for our own ideas and beliefs of the world,” Aucoin says. “Alice is just going deeper inside her own beliefs until it’s the end of her. That’s our journey too, to keep figuring out how we want to view everything and redefining our foundations of beliefs.”

Aucoin equates the process of shaping and defining our beliefs to a game of Jenga. “When we’re kids, it’s just as simple as setting up the pieces,” he says. “In order to grow, you need to keep taking pieces out and adding more – even if it makes your whole foundation of the way you view existence teeter back and forth. Nevertheless, you have to keep going if you want to keep growing.”

Though existentialism is an intense subject, it certainly isn’t Aucoin’s intention to bring the mood down. When asked how he wants his audience to feel after one of his shows, he says, “Really stoked on life,” insisting that his Death Tour will still offer the party atmosphere that has made Aucoin’s live shows renowned.

In a lot of ways, Aucoin has created an immersive “choose your own adventure” experience, where he brings together philosophical themes nurtured throughout the trilogy of albums while making his audience feel like they’re part of a celebratory community.

“Some people really enjoy thinking about philosophy, some enjoy the celebration of joy and the communal aspect of the party,” Aucoin says.

While he’s content with an audience that just wants to feel the vibe, he admits, “I’m happy if people take away the philosophy that’s been laboured over as part of the show as well.”