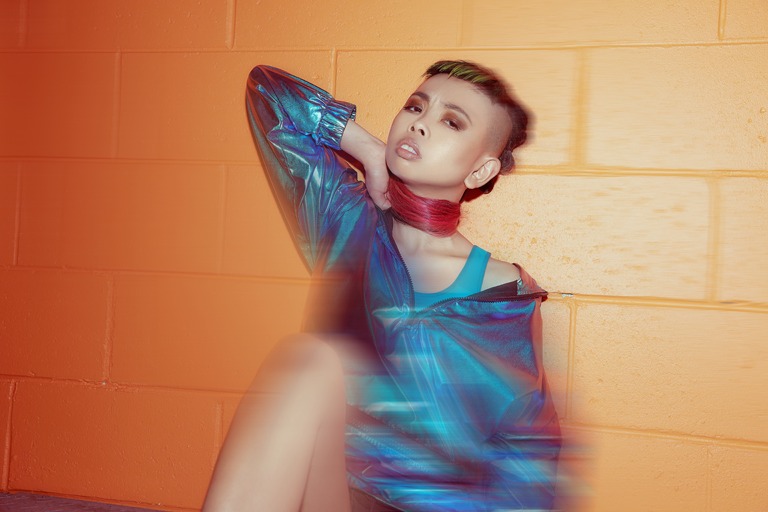 LÂLKA cannot be encapsulated in a single adjective. While she works in the genre of electro-pop, she subverts generic expectations with her rebellious spirit and her anarchic approach to producing music. Her DIY approach pop is surreal, cacophonous and a whole lot of fun, with manipulated vocals and foundation-shaking bass. Since 2017, the Brisbane-based producer, vocalist and musician has released singles to acclaim, winning a spot as a Triple J Unearthed artist at FOMO 2019. Since then, she has performed at BIGSOUND, Laneway Festival and NGV Friday Nights. On stage, she’s relentlessly energetic, a dynamo in a one-woman show. LÂLKA advocates for women of colour and marginalised people taking up space, and for unabashed self-expression. “Go Psycho” is an anthem for those who reject the status quo and rebel against patriarchal oppression, while “Bang Bang” is about embracing yourself and having fun. With all the time she has spent in her studio recently, we can look forward to more boundary-pushing music from LÂLKA in 2020.

How much of yourself do you project into your music and performance?

I think human beings are complex, so it’s never just a binary answer. My music and performance is an extension of myself, if not my whole complete self.

Did it take you a while before you felt comfortable making the kind of music and visuals you are now? Has the way you express yourself changed over the years?

Yeah, it definitely took a while. You know how sometimes Facebook comes up with a memory – and you look at a status post or photo, and think, wow I was such a different person back then? I’ve seen how much I’ve grown in confidence about my own self, and as a result, my art.

There has been a lot of talk around Lana Del Rey recently, who claimed she “Never had a persona. Never needed one. Never will.” Do you consider LÂLKA to be a persona?

I’ve never thought of LÂLKA to be a persona but rather an amplified version of myself.

What is your experience as a woman of colour in the music industry in Australia?

I’ve been mistaken for other Asian-Australian female artists in the past.

You talk about how representation matters, and how you post photos to Instagram “To be seen. To be heard. To take up space.” Do you ever find it challenging to take up space in the music industry?

Short answer: yes. But I’m trying and not giving up. I’m hoping that this inspires other humans of colour or marginalised people to do the same.

Do you think we’re seeing more representation of women on colour in the music industry, generally, and in pop and electronic music, specifically?

I’m not sure whether it’s because I’m more attuned to it that whenever I see another sis of colour I’m like “yaaaasssss!!!!” or whether it’s actually becoming better for us. I do know that we haven’t achieved equality yet when it comes to representation for women of colour in the music industry, specifically in electronic music. I’d like to take this opportunity to shout out my fellow Asian women who make electronic music: Rainbow Chan, Corin, May Lyn, Princi.

NGV/BIGSOUND/FOMO all drew different audiences, so in that sense, they all had a slightly different vibe. But one thing that’s consistent in my sets is the sense of fun, anarchic energy I bring.

What’s it like to perform new singles like ‘Go Psycho’ and ‘Bang Bang’ on stage? Has your performance style changed since you first started releasing music in 2017?

Performing ‘Go Psycho’ and ‘Bang Bang’ is super fun! In terms of how my performance style has changed, I dance (if you call my movements “dancing”) a lot more now!

You’re a classically trained musician. What is your training? How does it come into play when you’re making and producing music?

I trained in piano, violin and theory. I don’t consciously rely on my training in my music-making but I’m sure on a subconscious level it informs my workflow.

On Facebook, you describe your music style as “hip hop influences with PC-music vibes.” PC Music is known for its surreal and exaggerated take on pop music. How does the PC Music vibe inform your sound and style?

I just LOVE using interesting, unexpected textures and sounds in my music, so that’s why I describe my music that way.

You have been recording new demos recently. What are your writing and recording processes?

Writing process – I generally have an abstract sonic concept to begin. There’s always a starting point – and how the song actually turns out is not always unexpected. Recording process – I do everything on my laptop, record my vocals and any real instruments at home or in hotel rooms.

Your music is often compared to Die Antwoord, Grimes, Charli XCX and SOPHIE. Which artists inspire you?

First of all, I need to clarify that whilst I’ve often been compared to Die Antwoord, I absolutely find no inspiration from them and am disgusted by their racist views. I can see why people immediately latch on to the Die Antwoord comparison with my vocal tone, but that’s surface-level comparison.

This article was originally published on Savage Thrills.