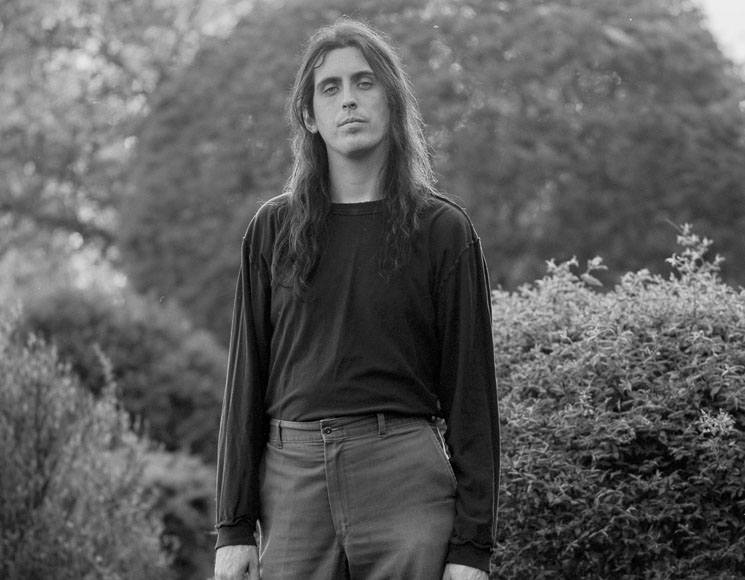 Brandon Williams has an ambivalent relationship to his hometown in southern Ontario. It serves as both the inspiration behind his music, and place that’s a subject to criticism.

“The finance minister under Stephen Harper, Jim Flaherty, lived 300 metres away from me,” Williams says from an airy loft in Toronto’s Junction, where he’s been working with director Justin Singer on a video accompaniment for Chastity’s forthcoming album, Home Made Satan. “He had a massive sprawling property among these average to small one-car garage type of homes. It was this privilege on the hill, and then the rest of us. It’s just this weird…” he pauses, reflecting. “It’s Whitby, you know?”

On Chastity’s debut album, Death Lust (2018), Williams leveled his criticism of organized religion and unravelled the experience of losing faith with unrelenting intensity.

On his sophomore album, Home Made Satan, he presents a scathing criticism of far-right politics. He talks about exposing racists and the KKK in Ontario (“Spirit Meetup”) and about misogyny and hostility towards marginalized people (“The Girls I Know Don’t Think So”). While he contrasts the American Dream with “elected fascists” (“Flames”), throughout Home Made Satan he plants his narrative close to home to criticize inequality in Canadian society.

“Home Made Satan is about continuing to fight for your life, about defending other vulnerable lives,” says Williams in an Instagram post in advance of the album release.

In the video for “The Girls I Know Don’t Think So,” Charlotte Nurse – an activist and friend of Williams’ – and Holden Abraham, son of Fucked Up vocalist Damian Abrahams, carry signs that say, “Black Trans Lives Matter.” It’s a message Nurse selected and Williams endorses. “It’s a voice that matters to me,” Williams explains. When asked if he found it challenging to write lyrics as an ally, he says, “No, not at all… To me it feels inevitable.”

For Williams, naming the album was crucial to its narrative. It was an intentional decision to call it  Home Made Satan, rather than Homemade Satan. “I wanted to emphasize the home,” he explains. “It’s an album about seclusion, and just hatching a million different fears.”

While Home Made Satan is more effortlessly melodic than the deftly discordant Death Lust, it has in common unflinching lyrics. Like Chastity’s debut, Home Made Satan is a concept album. The album’s protagonist is an unnamed young boy growing up in Whitby. Much of the character was inspired by is own upbringing with some flexibility. “I’ve given myself some liberty to say things,” he admits. “On ‘I Still Feel the Same’ I say, ‘Bring your Parliament / to my subdivision / we’ll rip them limb from limb / I’m talking Andrew, Justin.’

Of the shift in focus on Chastity’s albums from religion to politics, Williams says, “I think a political record was inevitable.” After touring through North America and Europe behind Death Lust last year, Williams realized that once his music had reached cities as far as London and Berlin, he felt responsible for using his music as a political and social vehicle.“Using this platform for the greater good was needed. I just felt compelled.”

Now a year after he first penned the open letter to Ontario premier Doug Ford about his decision to drop the bottom floor price on alcohol, he’s frustrated that while Whitby Brewery has recently opened in Whitby’s downtown, the town still doesn’t have a music venue. “I just worry about Whitby and the Durham region,” he reflects. “Durham’s got 500,000 people. Why doesn’t it have something? It’s a threat to the community, really, and a threat to young people engaging with each other and becoming socialized, cool people. I’m not saying it can’t happen without a venue but I think a venue helps.”

It’s not surprising that Williams would be such a vocal advocate for places to people to collectivize. Ultimately, he wants to make music that would have resonated with him as a teenager growing up in the periphery of big cities. “I want to do an outskirts tour. I want to do a tour of only playing places like Whitby,” he says. “I can’t picture the day that Chastity will lose that outskirts feeling because it’s what we are. It’s what the project is.

“I’ve said before that there’s thousands of Whitbys and millions of skid kids. I was one of them. I am one of them. I’m from one of those places and I think there is a voice there; I’m just singing the neighbourhood song.”